How do I Automatically Add a Subscriber to a Hidden List?

In certain cases a user would like to automatically add a subscriber to one or more lists when that subscriber signs up via an embedded subscription form.

Subscription forms are tied to a database, meaning that when your website visitor clicks on the button or link that opens up your Pinpointe embedded subscription form, after they provide the requisite information and submit the form, their contact information with be down-streamed back to the respective database in your Pinpointe account. However, there are scenarios where you would also like to automatically add that new subscriber to one or more default lists but do so without specifically noting that event within the form itself. This can be achieved fairly easily with just a few changes to the Pinpointe-provided HTML code for the embedded form.

1. For example, we'll assume you are creating an embedded subscription form that will be used to subscribe respondents to a database called "DB-3". This is illustrated in Fig 1 below that shows the third step in the form creation, "Select Database". In this example, for the sake of simplicity, we won't select any other custom fields to include in the form. We'll just be collecting the subscriber's email address, which is part of the form by default. 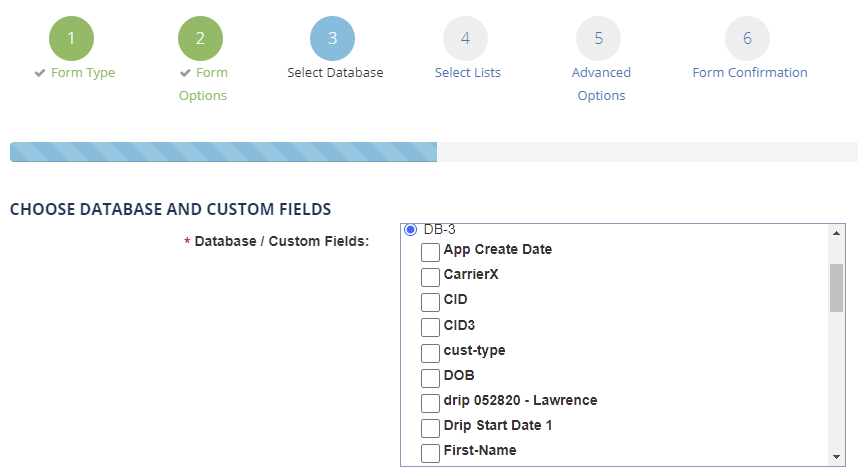 2. During the next step, "Select Lists", the user will be able to select one or more lists to include as a subscription option in the form. In Fig 2 below, The list, "Sub-auto-add", has been checked. The normal default form behavior would be to show this list's name to the site visitor when the form is rendered on the user's site, but in this scenario, we are going to make a few modifications to the user-accessible HTML code once we have created the base form.

3. The user would now complete the normal form creation process, culminating with coping the provided HTML during the final step. The user would then provide the HTML to their web development staff for inclusion as a resource file in their website file structure. A description of the entire process to creating an embeddable subscription form can be found here.

4. To automatically add a subscriber to our hidden target list is accomplished with two small changes to the HTML code.

The list option(s) will each be individually represented in the HTML as a standalone <tr> element, known as a "table row". Fig 3 below shows our example form's <tr> element for, in our case, the single list we want to automatically add the subscriber to.

The required HTML changes to make the list hidden and to automatically add the subscriber to the list are:

Should you have questions regarding this process, we encourage you to contact Pinpointe Support.

Did you find it helpful? Yes No

Can you please tell us how we can improve this article?

More articles in Subscription Form (Integrated Into Your Website)